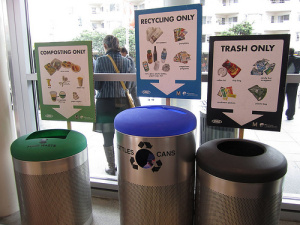 Recycling is necessary if we’re to preserve our planet, but when recycling becomes a hassle, many people say, “forget it.” For example, cigarette butts are recyclable, and although the process is fairly simple (collect cigarettes, seal them in proper packaging, and ship to TerraCycle), the vast majority of smokers don’t bother to recycle their butts.

At USAgain, we’ve always maintained that convenience is king in the recycling industry. While some are willing, most people won’t go through the process of shipping materials to be recycled or driving more than a few miles out of their way to drop off recyclables. We, members of the recycling industry, shouldn’t give up on trying to change people’s recycling behaviors, but we need to supplement it with accessibility. In other words, we need to make recycling the obvious choice because it’s easy.

Fresno isn’t the largest city on this list, but it packs a punch in terms of recycling rates. Many cities recycle about 30-50 percent of waste, but Fresno manages to divert an impressive 73 percent of trash from landfills. The city does this, in part, by reaching out to students and preaching the importance of recycling in schools, in hopes that the students will go home and educate their parents on recycling. Fresno has its sights set on the goal of 90 percent of trash diverted from landfills, which is well in reach for this eco-friendly city.

Like many cities, Austin uses single stream recycling. Single stream requires no sorting, as residents are able to recycle paper, glass, metals and plastic all in one recycling cart. What sets Austin apart, though, is their recent introduction of curbside composting to select neighborhoods. Starting in January, 7,800 Austin residences have been using 96-gallon carts to compost organic material for weekly pickup.

SFRecycles.org’s headline boasts: “In San Francisco you can now recycle just about everything.” Like Austin, San Fran offers curbside compost pickup in addition to regular recycling services, as well as free pickup for any items that are too large for regular pickup. The city also has a comprehensive guide to disposing of toxic materials, including the useful Recycle Where? tool for finding places that take toxic waste.

Popular Science lists Portland as the greenest city in the U.S., and with good reason. Portland offers recycling programs similar to the other cities on this list, but we’re highlighting Oregon’s largest city for its illegal dumping hotline. Residents are encouraged to call the hotline and report illegal dumping, as well as report “freelance” trash haulers who pick up trash and dump it illegally. This goes a long way toward keeping Portland clean and holding individuals responsible for illegal behavior.

Keeping cities green isn’t possible without cooperation from residents, and these cities are doing a fine job making it convenient for their people. Drop us a line with a comment on your municipality’s recycling programs – we’d love to hear what cities across the country (and world) are doing to go green.