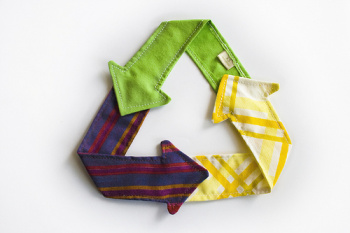 We—the United States—throw away a lot of stuff every year, and that’s really the only way to say it.

To be more exact, the U.S. generates an EPA-estimated 250 million tons of municipal solid waste (MSW) a year, or 4.4 pounds per person per day. That number is too high, as the disposal of waste presents the environmental hazards of methane and CO­2 emissions, both major contributors to climate change.

The thing about MSW is that it doesn’t include industrial, hazardous or industrial waste. It’s just the stuff we buy, consume and eventually dispose of. Although we generate 250 million pounds of waste, we don’t throw all of it in the trash. Some of it is recycled.

Let’s focus on that last fact for a second. Textiles, including clothing, shoes and other household items, such as towels and bedding, are a significant portion of discarded MSW. Just 15 percent of textile waste is recovered, a shockingly low number, especially when considering the overall recovery rate for MSW is 34.7 percent.

Increasing textile recovery is a necessity if we’re to achieve the EPA’s goal of 50 percent nonhazardous solid waste diverted by 2015. Other recyclable items, like yard trimmings (8.8 percent of trashed MSW) and metals (also 8.8 percent), are other “easy targets” for reducing waste.

So what can the average person do to reduce their MSW impact? Start by checking with your municipality on what’s recyclable via curbside pickup in your area—your area might have a more comprehensive recycling program than you thought. For harder-to-recycle items, use Earth911’s helpful recycling guides on how, where and why to safely dispose of everything from light bulbs to mattresses.

Limiting household waste is one of the easiest ways the average household can reduce its environmental impact, and unlike buying a hybrid car our outfitting your home with environmentally certified appliances, it doesn’t cost a dime.

Next time you tie a trash bag to toss on the curb, take a second look and make sure recyclable items haven’t found their way inside.