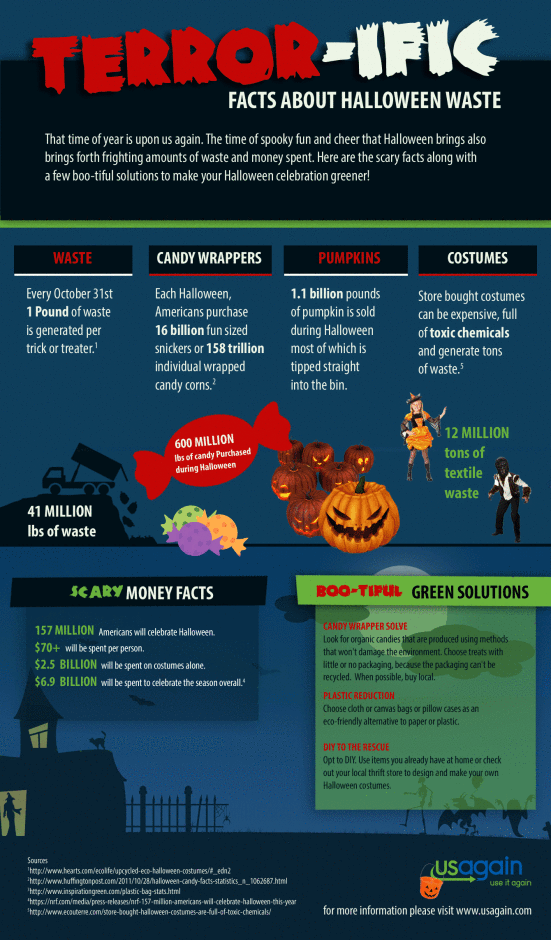 On Halloween we make light of our fears. We dress as scary figures for fun and enjoy celebrating what frightens us most.

But for environmentalists, this $7 billion dollar disposable holiday ismore like a nightmare come true. Putting the “eek” into eek-o-friendly, the waste created by 41 million trick-or-treaters prowling the streets doesn’t just vanish with the creatures of the night.

Luckily with the right “tricks,” anyone can green their Halloween without sacrificing any of the treats or fun.

COSTUMES: What you’re wearing is scarier than you think!

A record number of Americans are now purchasing their costumes. According to the National Retail Federation, Halloween is one of the fastest growing consumer holidays. In 2014, the NFR estimated that more than two-thirds of celebrants, about 67.4%, would be purchasing their costumes with adults outspending children at $1.4 billion dollars. Another $1.1 was estimated to be spent on children’s costumes and about $350 million spent on costumes for pets.

While escapism is on the rise, it’s impossible to evade the aftermath of one single night that leaves 41 million pounds of clothing waste amongst young trick-or-treaters alone. Costumes made of synthetic fibers, like nylon, won’t decompose for at least 30-40 years, long after the ghosts, goblins and Frozen princesses have outgrown their Halloween gear. Not only wasteful and expensive (Americans are spending $70-80 per person), store bought costumes can be full of toxic chemicals.

Not-So-Scary-Solution: Green your costuming with simple DIY tricks. Use items that you already have at home or swap with friends. Make sure to recycle your old or unused costumes instead trashing them.

CANDY WRAPPERS & PLASTICS: A Not So Sweet Surprise!

Americans purchase nearly 600 million pounds of candy a year, the bulk of which is thought to be consumed around Halloween. Placed into the context of packaging that is not recyclable, that’s about 16 billion fun-sized snicker wrappers. According to the EPA, packaging generates over 30 percent of the solid waste in the US.

And don’t forget about the plastic pumpkins and totes used to haul that sweet stuff. Americans use more than 380 million plastic bags annually with less than 5% being recycled. Not only do the bags take up to 1,000 years to break down, the production of bags (and packaging) requires petroleum, natural gas, and toxic chemicals.

A Sweeter Alternative: Look for organic candies that are produced using methods that won’t damage the environment. Choose treats with little or no packaging, which can’t be recycled. Select treats that come in cardboard packaging. When possible, buy local. Use a cloth, canvas bag, or pillow case as eco-friendly alternative to a plastic carrier.

If you can’t avoid the temptation of your Halloween favorites, try to give the candy wrappers a second life and crafting them into something cool.

PUMPKINS: Save a Pumpkin and Save the Planet

Halloween has helped to create the demand for 1.1 billion pounds of pumpkin per year. Carved jack-o-lanterns and fall decor can easily be rescued from becoming part of the 35 million tons of food waste generated in the U.S. Make the most of your pumpkin by cooking something delicious with the inside. When you are finished with it, keep in mind that due to lack of oxygen, pumpkins don’t break down well in landfills. Break the pieces down for compost or look for a pumpkin recycling program in your city. You can even use pumpkin to feed wild animals and some zoos will accept pumpkin donations to feed their animals.

Hope you have a green and clean Halloween!