From must-watch commercials to copious amounts of tortilla chips, the Super Bowl is nearly synonymous with consumption and profits. Last year, spending in the United States on Super Bowl-related merchandise, apparel and snacks was an anticipated $14.3 billion, or an average of $77.88 per consumer. Advertisers spent $4.5 million for one 30-second commercial. (That’s an average of $150,000 per second.)

While we gather with more than 100 million others to catch our favorite ads and root for our favorite players on the turf, this year’s Super Bowl is “making green” but on a whole new level.

For the first time in history, the Super Bowl will be held at what could be the greenest stadium in the NFL. The Levi’s Stadium in San Francisco (home to the 49ers) is first NFL playing facility to receive LEED Gold certification, a rating system by the U.S. Green Building Council. 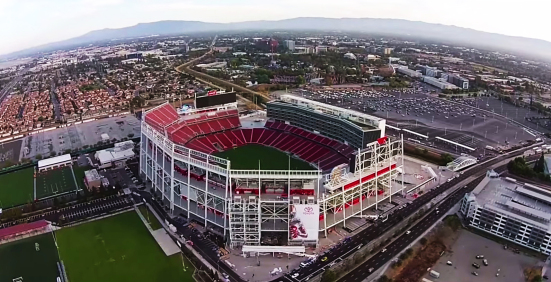 Typically, stadiums use massive amounts of energy and therefore, create a lot of waste. But this year, the pigskin will be tossed around on sustainable site where location is key. Public transit is readably available and there is even a bike path to help lower greenhouses gases

Ushering the term “Football is Life” into a new dimension reality, the Levi Stadium practically thrives on the key elements for stainable life. From the earth to the sky, the stadium exists with the help of natural elements so that the game can go on in years to come.

GRASS: You don’t even have to be inside the eco-friendly stadium to appreciate the green. Visible throughout the entire game, one of the greenest features - the playing field - is made of a specific grass, locally grown, called Bandera Bermuda. Because it is tough, durable, and not too thirsty, it requires about 50% less water than traditional fields. Underground sensors are used to monitor the soil’s moisture, salinity, and temperature to decide when to turn sprinklers on or off saving every drop of water.

H2O: About 85% of water throughout the complex (including run off from the field to the low-flow toilets) is recycled. This conserves drinking water, a valuable commodity for stadiums. Thanks to high-efficiency toilets and sinks, the stadium will use 40 percent less water than California building codes require.

SUN: A green roof-scape includes a canopy on top of the nine-story suite tower and three pedestrian bridges that are covered in 1,150 solar panels that add up to about 375 kilowatts. Over the course of a year they can produce enough electricity to power all the 49ers home games. While part of the roof benefits from the sun, another half is designed to provide naturally advantageous relief from the heat. The living roof, with 27,000 square feet of drought-resistant native plants, is made to help with the cooling of the suite tower. The tower itself was engineered to require fewer ushers and fewer plumbing pipes. Other stadiums typically spread the suites all over the place. The benefits of single tower extend beyond the efficiency for lucky ticket holders. As a result of all the suites being in one tower, non-suite fan goers are seated lower and closer to the action.

All this green going won’t go unnoticed. On game day fans will be able to view a live dashboard display at the stadium that features current energy measurements, water and air monitors, and other dynamic green features that share the building’s daily operations.

Want to pretend like you are part of the action? You can make sure that the grass is greener at your place on game day, too.

1) At your home party, serve locally produced food. The Levi Stadium’s concessionaire is focused on local suppliers and farm-to-table menus.

2) Make sure to recycle and compost. As within other stadiums in San Francisco, public composting is encouraged and widely supported.

3) The stadium is all about reusing and renewable resources. In addition the recycled materials used in building products, the suites are made with reclaimed wood from a local airplane hangar. After your Super Bowl celebration, you consider, just like the building designers, what you could repurpose. Thanks to new levels of recycling, you can find a way to give most of your unwanted items new life. At USAgain, we’ll happily take your (un)lucky team t-shirts, old sports duds, workout clothes and shoes from games past. Just find a convenient textile recycle bin near you (hint: try our locator) and we’ll send your surplus clothes, shoes, and other household textiles onto a new victory.

According the EPA, 12 million tons of textiles go to landfills annually - most of which could be recycled. Together, we’re putting your old gear back to use and giving it a second life for people who can’t afford brand new clothes. What’s more, every time you recycle your textiles you’re conserving natural resources, prevent green house gas emissions and saving landfill space. It’s a win-win for everyone!