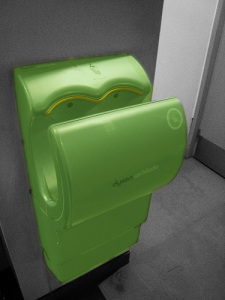 Eco-consciousness has made its way into all facets of our lives, including the bathroom. When drying your hands after a trip to a public bathroom, you’re generating waste if you’re using paper towels.

Paper towels might be useful for drying your freshly washed hands, but they put unnecessary strain on the environment. To produce one ton of paper towels, 17 trees must be cut down and 20,000 gallons of water are used. In one year at work, the average person uses as many as 3,000 individual towels in the bathroom, which makes it as financially wasteful as it is environmentally irresponsible.

Offices, stores and restaurants realized paper towels were making them lose money a while ago, leading many to implement air dryers in restrooms. The hand dryer was invented by George Clemens in 1948, and while all early dryers reduced the need for paper, they weren’t totally environmentally friendly.

Inefficient, old-model hand dryers might be slightly more eco-friendly than paper towels, but why settle for that? If a dryer is pulling an excessive amount of electricity from its source, it is wasting power. Conventional dryers consume 0.023 kWh per use, and while newer, more efficient models consume as much as 80 percent less energy, they aren’t as widely implemented. Also, many conventional dryers just don’t do a good enough job of drying wet hands, leading to people grabbing paper towels or napkins to dry off. As it turns out, many of the eco-friendly dryers are the ones that do the best job of drying.

The paperless office of the future hasn’t yet come to fruition, but the paperless restroom, on the other hand, is much closer to reality. The following are a few of our top picks for eco-friendly hand dryers to limit energy usage and paper towel waste.

The Airblade comes at a high price, over $1,000, but its running costs are impressively low. According to Dyson, the cost to operate the Airblade is one-fifteenth that of paper towels and one-fifth that of conventional dryers. The Airblade expels room-temperature air at over 400 miles per hour onto the user’s hands, resulting in a drying time of approximately 10 seconds, a quarter of the time a conventional dryer needs to get the job done.

The BluStorm isn’t quite as fast as the Airblade, but it still manages to dry hands in 15 seconds. The manufacturer estimates the BluStorm saves 70 percent of the amount it would cost to operate a conventional dryer, and it also features a 60-second shutoff to prevent irregular or excessive use.

The XLERATOR is another dryer that promises to dry your hands in about 10 seconds. It’s priced around $500, making it a competitor to the comparably priced BluStorm. It isn’t as eco-friendly as the Airblade, but it is definitely an upgrade over conventional dryers and paper towels.

At USAgain, we’re proud to announce we’re in the process of installing Dyson Airblade dryers in our Chicago office bathrooms. Our employee reviews have ranged from “pretty neat” to “this thing is awesome.”

Paper towel waste is one of the laziest ways we add to the waste stream. All too often we pull paper towels from a dispenser and casually toss them in the trash. According to Earth911, 13 billion pounds of paper towels are used in the U.S. every year. If everyone used one less paper towel a day, we’d save over 500 million pounds of waste. Now, how much could we save if we stopped using them altogether?

2 thoughts on “Going green in the bathroom”