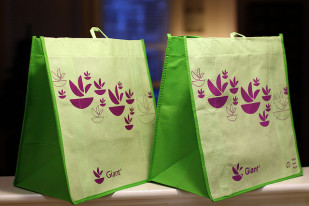 Last month, the City of Los Angeles passed a significant bit of environmental legislation. LA approved an outright ban of plastic grocery bags in a city council vote of 9-1. In addition to banning the bags, which costs the city $2 million in annual litter cleanup, LA plans to distribute one million reusable bags in low-income neighborhoods.

LA became the largest U.S. city to ban free plastic bags and should serve as an example for New York, Chicago and America’s other major metropolitan areas. Plastic bags are something many of us rarely think about: we shop, check out, grab our bagged items and head home, where we un-bag the items and forget about the bags. Some get reused around the house, but most of them find their way to the trash.

As Factory Direct Promos’ infographic shows, five trillion plastic bags are produced annually, and bags take an estimated 1,000 years to disintegrate completely once landfilled. Although the usage span (from store to home) of the average bag is 20 minutes, each bag impacts the environment for much, much longer.

As a green company, USAgain supports LA’s grocery bag ban and hopes similar bans will come to fruition in other cities. Since we’re a textile recycling company, we say why stop at grocery shopping when using reusable bags? The average American spends $1,452 on clothing annually, which amounts to quite a few bags when you consider all of that shopping isn’t done in one trip.

Sure, it hasn’t completely caught on yet, but we think reusable bags should be used for all kinds of shopping. Keeping a few reusable bags in your car at all times is an easy way to ensure you’re always able to carry purchased items in an eco-friendly way, and for the times you’re caught without a bag, request a paper bag from the store and recycle it or go bag-less, if possible. If all you’re buying is a can of soda and a snack, you don’t really need a bag, do you?

For the DIY-types, Ecouterre has a step-by-step guide to transforming an old T-shirt into a reusable shopping bag. This is truly a win-win—keeping textiles out of landfills and reducing dependence on plastic grocery bags. The EPA estimates only 15 percent of textile waste is reused or recycled, so if you can turn an old shirt into a grocery bag, you’re doing your part to increase that number.

If Los Angeles does indeed serve as an example for other cities, the day when plastic grocery bags are totally banned may not be too far away. Since 2007, California as a whole has adopted 56 total bag-banning ordinances, so the time to buy or make a reusable bag is now. Once you’ve got your hands on a reusable bag, don’t think of it as strictly a grocery bag—use it for everything. It’s a bag, so it won’t know the difference. We promise.

4 thoughts on “Reusable bags no longer just for groceries”