Can you go without electricity for one hour?

Everyone surely has at one point or another although it was probably the result of an unexpected power loss. This time, however, it’s part of a plan. That plan is Earth Hour, which is taking place this Saturday (March 29) from 8:30 to 9:30 p.m. 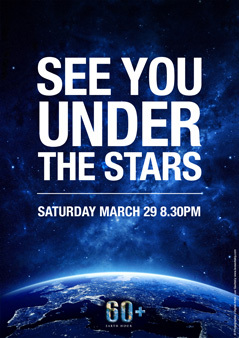 If you haven’t heard of Earth Hour, that’s okay—it’s a simple concept and participation doesn’t require anything more than a little effort. Earth Hour was created by the World Wildlife Federation in 2007 as a way to engage a massive mainstream community on environmental issues. The initial observance of Earth Hour was in Sydney, Australia, as thousands of homes switched off their lights and appliances to show support for climate change action. In the years since, Earth Hour has seen over 7,000 cities worldwide turn off electricity for one hour in March.

Just like Earth Day, Earth Hour has grown to incorporate new environmental initiatives. In 2012, the campaign added the Earth Hour City Challenge, a movement designed to inspire cities to adopt low or zero-emission development plans because over 70 percent of the world’s emissions are generated by cities. Vancouver was chosen as 2013’s most lovable sustainable city.

Whether you’re a city dweller, suburbanite or live in the country, you can spread the message of Earth Hour via the helpful Earth Day Starter Kit on the campaign’s website.

You can also find other ways to get involved in Earth Day this March.

You’ll need to turn the lights back on after Earth Hour ends, but before you do, take some time to examine the environmental impact and efficiency of your lighting. If you’re still using incandescent light bulbs, consider switching them out for compact fluorescent light bulbs (CFL) or light-emitting diode (LED) bulbs. Doing this can save anywhere from $40 to $135 in energy costs over the lifetime of the bulb, and as an added bonus, CFLs and LEDs last considerably longer than incandescents, meaning waste is reduced by making the switch.

If you have another hour to spare on March 29—or any upcoming day—we at USAgain recommend taking some time to clean out your closet. Spring cleaning season is quickly approaching, so why not get a head start and make the closet your first target? For every pound of textiles, or two T-shirts, you’ll prevent the emission of seven pounds of CO2 and save 1400 gallons of water. And there’s a good bet you’ve got a lot more than two unwanted T-shirts lying around in the back of the closet.

When you flip the switch at 8:30 p.m. local time for Earth Hour, think of the other ways in which you can bring about environmental change. Leave a comment telling how and where you’ll be observing Earth Hour.